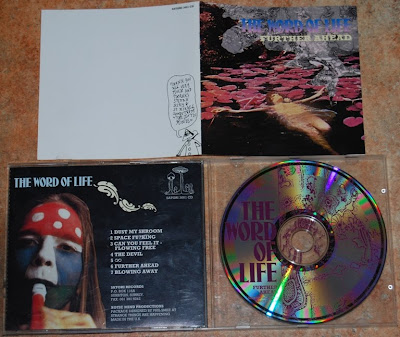 For a short period in the early to mid 1990's, a collective of Swedish musicians decided to relive the past and create improvisational psychedelic rock music similar to the early 70's masters such as International Harvester and Algarnas Tradgard.

Acts such as S.T. Mikael, Adam, Stefan and the Entheogens all recorded for the low budget label Xotic Mind. The primary difference between the modern day copiers and the 1970's masters is the one-dimensional nature of the recordings.

This trait can be attributed to most of the albums being solo projects with only guest musicians.

One of the better bands on the label were The Word of Life, a band lead by Mans P. Mansson, a multi-instrumentalist who plays guitar, sitar, synthesizers, percussion and sings. He is joined by many guests, though most important is the fine flute work provided by Anna Nystom. On the debut, Further Ahead, Mansson manages a varied improvisational psychedelic album.

Long burning jams such as "Space Fu?king" and "Can You Feel it - Flowing Free" are offset by calm flute and hand percussion ragas like "The Devil". What one notices in repeated listens is the need for an editor (a problem for many of these kind of solo ventures). Most of the jams meander on for too long and the inclusion of a couple of Earthy country-bumpkin vocal tracks with Louisiana-front-porch harmonica are in complete contrast to the hazy heady cosmic aspirations the album pretends to be.

Still, the album works on many levels, most notably the trance-like jams, which can get quite intense. The guitar tone is super fuzz loud and the percussion is particularly active. Recommended for all Krautrock, space rock and early Swedish pioneer groups. The original LP contained a paste-on cover and is now quite rare. Better to find the CD on Satori.

The sophomore effort, Dust, is quite a bit different from the predecessor. More variety and less jam oriented, this album tries to please on a number of fronts. "When I Was in Space" opens promisingly enough with oscillator-emulated synth runs and heavy percussion. But, alas, this goes on too long and becomes redundant, and one wishes for the sage advice of a wily producer.

The songs on this album have a sort of "retro lounge" naïve melody line motif which I find oddly appealing. No doubt there are plenty of sizzling guitar jams to bang your head to, just less of them than the ambitious debut. I find both of their albums to be good fun if you don't take them too seriously. And a few tracks are just devastating, especially on the debut.

Posted by Psych-Spaniolos at 19:26 No comments: 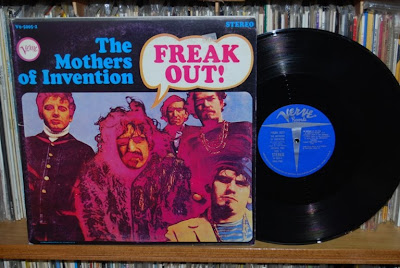 3. Who Are The Brain Police?

4. Go Cry On Somebody Else's Shoulder

9. Any Way The Wind Blows

11. You're Probably Wondering Why I'm Here

15. The Return Of The Son Of Monster Magnet