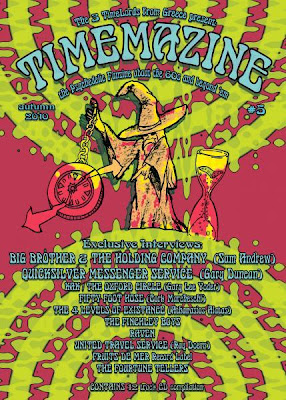 You can find out about getting a copy by contacting mtimelord@gmail.com

The yearly Greek psych magazine TimeMazine 88pages (all in English) has a 10 page interview with Sam. It's just come out. TimeMazine is by the Time Lords of Radio Tripolis Greece...a real labour of love. The zine comes with a cd with songs of those interviewed too.. includes Blindman recorded in 2009 in Rubigen Switzerland with Greek references by Peter. There are also interviews with Gary Duncan of Quicksilver, Gary Lee Yoder of Oxford Circle and Kak and Cork Marcheschi of Fifty Foot Hose besides Finchley Boys, United Travel Service and a Greek band the 4 Levels of Existence and others too.
Posted by Psych-Spaniolos at 17:34 14 comments:

You know, you must try the new ice-crem flavour
Do me a favour, look at me closer
Join us and go far
And hear the new sound of my bossa nova

Baby, baby
It's been a long time

Look here read what I wrote on my shirt
Baby, baby
I love you

You do!
Posted by Psych-Spaniolos at 17:11 No comments:


This was the decade﻿ when music wasent really connected with money. Music was to make a point, make a change. But we can all hope that music in the future will be like this. 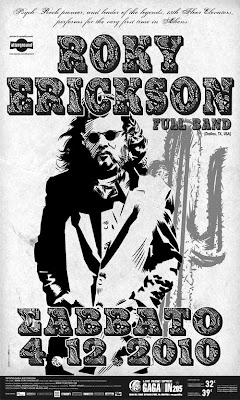 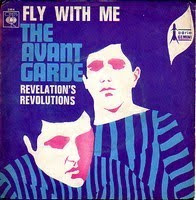 1. The Avant-Garde was an American psychedelic pop group formed by Chuck Woolery and Elkin "Bubba" Fowler in 1967. They released three singles on Columbia Records in 1967 and 1968, backed by different session musicians on each release: "Yellow Beads", "Naturally Stoned" (which hit #40 on the Billboard Hot 100 charts in mid 1968)[1], and "Fly With Me". Despite the success of "Naturally Stoned", the group disbanded after "Fly With Me" and never released a full album.

After The Avant-Garde, Fowler went on to a career as a folk singer. Columbia released his LP And Then Came Bubba in 1970, and he played guitar on albums by Bob Dylan and Leonard Cohen. Woolery became a country music artist on Warner Bros. Records and later Epic Records, charting twice but never releasing an album.[2] He has since become a game show host, appearing on Wheel of Fortune, Scrabble, Love Connection, Greed, and Lingo. "Naturally Stoned" was also used as the theme to a short-lived reality television series on GSN that starred Woolery, entitled Chuck Woolery: Naturally Stoned.[1] 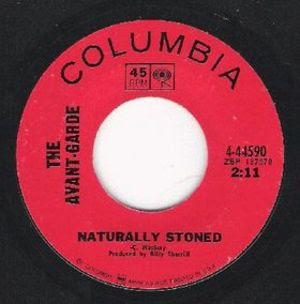 2. This band is best known for Naturally Stoned which hit the Billboard chart at No. 40. and is best described as orchestrated 'psychedelic pop' (the lyrics may be psychedelic but the music is pop) with the backing sounding like a James Bond-type movie theme. It is the flip side which has been compiled however: Honey and Gall resurfacing on Psychedelic Unknowns Vol. 8 (LP & CD) and being an unusual and captivating hippie-psychedelic effort.

Yellow Beads is also dreamy acoustic hippie-pop in their unique style. The final 45 reverts to more standard orchestrated pop format effort on Fly With Me but is rescued by the electrified folk-pop flip.

All their material was composed by B. Fowler or C. Woolery, who it turns out is none other than Chuck Woolery, who would later become one of America's top game show hosts-- he was the original emcee of "Wheel of Fortune" before adding his brand of smarminess to the matchmaking "Love Connection".

The say grow up
Put your mind on
What you have to do
But I know I can never
Make it, baby, without you 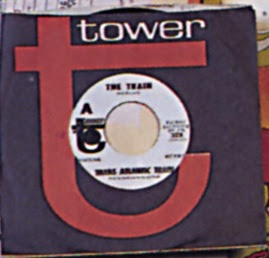 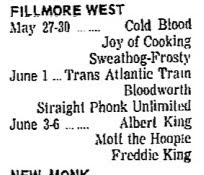 A folk-rock band from Monterey, they have one previously unreleased cut from 1966 titled "In My Way" on the Big Beat comp Good Things Are Happening.

Transatlantic Train were from the Monterey area. The group were originally The Dutch Masters. They changed their name to Transatlantic Train sometime in 1966. The line-up of the group was probably Bob Buccelli, Steve Bayard, Tom Mullenix, Dennis Brown and Tony Costa.

Transatlantic Train recorded at Golden State Recorders in San Francisco in early 1967 and released one single later in that year. The group continued performing with varying personnel until 1969 but did not release any further recordings. 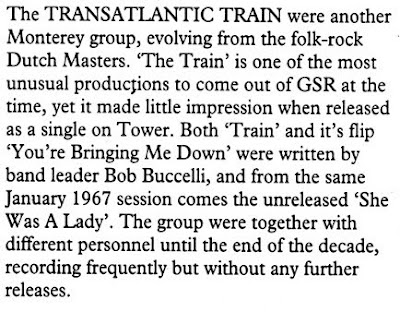 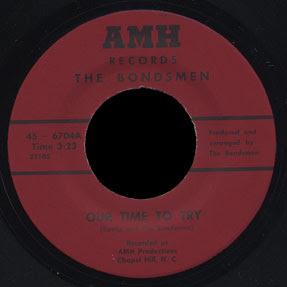 I'm Ken Haywood, the guitarist for the Bondsmen. This site has me thinking about the period between 1964 and 1970. Very interesting times and music.

Jim Bowen - bass & backup vocals - Jim lives in Charlotte, NC. We keep in touch and see each other on occasion. He played in classic rock bands around Charlotte in the 70's and 80's. I don't know if he's still playing now. Jim had the Hagstrom III bass that matched my guitar...cool.

Tim Hutchinson - trumpet & backup vocals - I haven't seen or heard from Tim since probably 1970. At that time I think he was in school and teaching music in Greensboro, NC.

Phillip Pearson - drums & flugelhorn - We did a version of "Love Is Blue" w/ trumpet and flugelhorn. "Phil Lee" lives in Nashville, TN and has had a successful music career. He has recorded a couple of highly acclaimed CD's in the folk-country-rock genre. It's been several years since we've talked.

Archie Thomas - vocals - I always considered Archie to be the band's main attraction. He was a great singer and everybody loved him. In the mid 70's, I recruited Archie to sing with the Castaways, a local R&B/Beach group. He sang with us for a short time, but work and family had to come first. What a great vocalist and good friend.

Gene Galligan - keyboards and vocals - Probably the one guy in the bunch that I figured would NOT be involved in music later in life. I had to beg him to play!!! I still remember Gene doing "The Ballad of Ira Hayes" one night..cool. Gene was more classically inclined so I can remember trying to get him to simplify and stay out of the guitar's way! Just kidding... We email and keep in touch.

John Santa - Guitarist and songwriter - Although never an "on stage" member, he was a true inspiration and great friend. I knew that the UNC Journalism School gig would do weird things to ya...Bluegrass...did you say Bluegrass? John, if you read this, we really have to get together so you can straighten me out...

Ken Haywood - Guitarist & vocals - I have been playing guitar and bass since 1963. I've done the Garage Rock to Soul/Disco to country Rock back to R&B Dance and currently play in a Society/Wedding band. Can you imagine playing Sinatra's "The Way You Look Tonight" and then 10 seconds later ripping into Jeremiah Was A Bullfrog? Holy crap! Been full circle and enjoyed most of it...

After Jim, Tim, Gene, and John left for college, The Bondsmen regrouped and continued performing for about another year and a half. The band also logged more time in the studio. This time a Raleigh, NC facility called Audiophonics. However, there were no singles released. We did get some local radio play of our "Got To Be Myself" recording written by Hubert Deans.

I am john santa, the writer of Our Time To Try. great to hear from mike hollander as well. gene and i have had some communication and he is still playing music as is ken i believe. archie i haven't seen in years but he was not singing or performing at all the last time i heard from him which is a shame cause boy he was a great vocalist and performer. i have no idea what happened to jim (bass) or tim (trumpet) or if they're even still playing music but i hope so. phil pearson is, in fact, performing under the stage name phil lee and was at one point doing some stuff (i believe) with or around neil young and some of his people. i occasionally hear from phil as he is in town to see his daughter, but it has been years since the last contact.
after college i released an album of original material on Moonlight Records called (as mike hollander mentioned) "Rainmaker" by the John Santa Band which consisted of myself, john ballew, steve wyrick, whitney french and shepp wasdell. It did fairly well at the time and can now be found in bargain cut out bins all across this great country. (so much for fame and fortune.) i have remained in the music business and write music for film and TV. i play about 18 instruments now and the book that gene galligan mentions is about my foray into the world of Bluegrass music called "Bluegrass Is My Second Language: A Year In The Life Of An Accidental Bluegrass Musician." it is available at www.bluegrassbook.com and has gotten very good reviews (i am proud to say) and has sold so well there will be a second edition out in mid 2008. in response to it's popularity, we are currently at work putting the book on CD (no release date as yet) AND are at work on a music CD called "The Blessing Of The Strings: Songs From The Book Bluegrass Is My Second Language." it features my original songs as well as originals from the members of the Bluegrass band i play with called EIGHTwentythree. (we took our name from the first day we ever played together: 8/23/01.) jeff wiseman is on banjo and lead vocals, greg eldred on lead vocal and guitar, keith carroll on acoustic (upright) bass and vocals. i play primarily mandolin, guitar, some dobro, harmonica (an instrument i learned to play for the Bondsmen btw) and a little cello on the album and also sing lead. this CD will be out in april or may of 2008.
sorry to go on so long (it's why my book is 512 pages long!!) but i am hoping to get some updates on some of the other players on here and find out what paths we all took.plus, without what i just wrote, none of what i say next would make much sense:
mike hollander wrote of the day jim bowen came into Northern High School with a box of records to sell and said it was electric.well it WAS but not nearly so much as the morning my clock radio went off and WSSB radio of durham north carolina announced a band called the Bondsmen (the name was suggested by drummer george outlaw another NHS student btw) had released a new record and here is one of the songs on it, Our Time To Try.to lie in bed as a high school senior and be awakened so unexpectedly by a song i had written and recorded with these incredibly talented musicians who happened to be my best friends was electrifying beyond my words to describe.
that moment literally changed my life forever and undoubtedly started me down the path i walk today with music so much a HUGE part of my life.