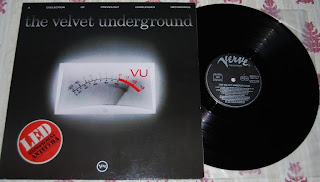 When The Velvet Underground moved from Verve Records (who had released their first two albums) to parent company MGM Records, they signed a two-album deal, releasing their third and eponymous album The Velvet Underground in March 1969. Later that same year, however, there was a management change and MGM Records' new CEO, Mike Curb was brought in to try to rescue the financially struggling label. He decided to purge the record company of its many controversial and unprofitable acts.

The Velvet Underground quickly became one of the groups blacklisted and were released from their contract. The band had, however, in the meantime recorded fourteen tracks for possible release as their second MGM album. All of these were shelved and forgotten by their record company until the early 1980s.
As Verve (by then an imprint of Polygram) prepared to re-release the band's three Verve/MGM albums on vinyl and CD, they found nineteen previously unreleased tracks: five Cale-era tracks and the fourteen "lost album" tracks, some of them in two-track mixdown format, some of them even on multitracks. The cream of the nineteen tracks was released in 1985 as VU; the rest was released as Another View in 1986.

VU is a selection from the 1969 tracks as well as two previously unreleased Cale-era songs—"Temptation Inside Your Heart" and "Stephanie Says". Since most of the material was available on multitrack (only "Ocean" is included in its original 1969 mix), engineers were able to clean up and remix the tracks.
As The Velvet Underground moved from MGM to Atlantic, they re-recorded two of the songs on VU, "Ocean" and "I'm Sticking with You", for possible inclusion on Loaded. Neither made the cut, but no less than six of the VU songs would be recycled by Lou Reed during his early solo career: "I Can't Stand It" , "Lisa Says" and "Ocean" on Lou Reed, 1972; "Andy's Chest" on Transformer, 1972; "Stephanie Says" (became "Caroline Says II") on Berlin, 1973; and "She's My Best Friend" on Coney Island Baby, 1976.
It peaked in the U.S. at #85, the band's best placing