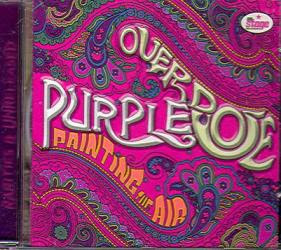 1) “Painting The Air” Whatever anyone says about this incredible psychedelic project, which popped out in 1986, is no more than a matter of poor words! Purple Overdose are among the very few honest representatives of the contemporary “paisley” culture after its initial movement back in the 60’s! In their 20+year career they have received nothing but highly acclaimed reviews internationally! The band, devoted to the American and British blend of pure psychedelia, has a dedicated following since their first release as early as in 1988 and from then on they expanded their fame by working on several other albums throughout the years! Their complete discography consisting of masterpieces only, is a fact that proves the band’s incontestable value! “Painting The Air” is a precious collection of unreleased tracks and rare remixes. Gems such as “Painting The Air”, “Still ill” and “Sail On Your Wings” among others are simply works of crafted art that will lead everyone to an endless trip in the land of Alice… The record is pressed on high quality vinyl and dressed in a multi-colored mind-blowing cover! “Painting The Air” is a seminal work that will satisfy all the psych-heads and the connoisseurs of the scene and is evidently one of the most important psychedelic releases to come out in the 2000's!!!

2) Based in Greece, Purple Overdose were one of the great psychedelic bands of the past several years. Though disbanded for a couple years now, their manager, Stefanos Panagiotakis, enthusiastically pursued making available this vinyl only collection of rarities and unreleased tracks. The songs on Painting The Air were originally recorded in 1989 with the intention of comprising their second album, slated to be titled Magic Forest. Five of the songs later ended up, in different forms, on what ultimately became their second album, Indigo.
Long time Purple Overdose fans will be pleased to know that two of the tracks are unreleased. "Painting The Air" is classic Purple Overdose 60's inspired psychedelia, a heady mixture of trippy song and acidic instrumental. And "Still Ill" is a special treat, being one of the first ever recorded Purple Overdose songs, and featuring a guitar/bass/drums trio version of the band. It has the trademark Purple Overdose sound, but has more of a down ‘n dirty garage-psych feel, and includes an ultra trippy jam section. Excellent! "Sail On Your Wings" originally appeared on the volume 3 CD of the fanzine The Thing in 1996, and was later included on the CD version of The Salmon's Trip Live. This track is a real highlight, featuring Purple Overdose at their most cosmic, with swirling guitars, a luscious 60's organ sound and a mind expanding atmospheric vibe. "2008 Old View" is the B side of the bands only 7" single, and is an intense song with more classic 60's organ melody and cool shimmering trip guitars.
Those who own the album Indigo will of course recognize the 5 songs that appeared on that album - "Moonlight Sunshine", "Cosmic Ladder", "Rain Without Storm", "Golden Eyes" and "Magic Forest". Diehard fans with a taste for historical perspective will enjoy hearing these earlier versions of the songs. Most have a rawer sound and feel than the Indigo versions, which in some cases has a special charm of its own, having a cool trippy flower power vibe. I particularly liked the version of "Cosmic Ladder" on this collection, which has much more of a garagey sound than what's heard on Indigo, and we get some really tasty screaming guitar lines. And though similar to one other, the versions of "Golden Eyes" and "Magic Forest" are each lengthy tracks that take off into jams that are worth hearing side by side.
In summary, Painting The Air is a real treat for fans of this sadly defunct band. And as most of their albums were vinyl only releases that are long out of print there are likely many of you out there who have never had the opportunity to hear any of these songs. Here's your chance.

This is a terrific band. Thanks for sharing and bringing them to my attetion,
Dave

Yeah, one of the best psychedelic revival bands. Thankx.