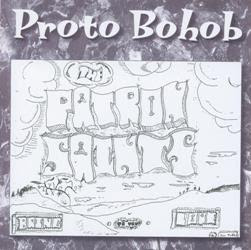 NB: (1) originally issued in thick white sleeve with front and rear paper 'slicks' glued on by hand. Some copies came with booklet (R5). Counterfeited in Austria in 1994 (300 copies with photocopied booklet), and in 1997 an official reissue was produced from the master tapes (American Sound 106202-3), 500 numbered copies with booklet and bonus 7" of unreleased material. In addition, (1) has been issued on CD with three bonus tracks (Patron Saint PSCD-101) 1997. More recently two compilations of unreleased recordings have appeared: Proto Bohob (Patron Saint PSCD-104) 1999, consisting of early demos from 1969, and The Latimer Sessions (Patron Saint PSCD-105/6) 2000, which is unreleased material from 1970-3 by line-ups 'B' and 'C'.

"Fohhoh Bohob" is a phrase common to many of the various, small tribal languages of Africa, which roughly translated means "Greetings of the mouth" - so now you know. Fohhoh Bohob was produced by the band over the course of a few weeks in the Summer of 1969, and it doesn't sound too much like anything else. There are moments where it could be The Velvet Underground, perhaps Pearls Before Swine, maybe Sidetrack or even Faine Jade influencing them, but one gets the impression that these guys made their own maps. There are a few places where the band seems to flounder, but other passages where their ability to impress is apparent. The album isn't a masterpiece but it is a very unique and unusual record, and many collectors rate it very highly as a result - others think it is amateurish rubbish. Only 100 copies were pressed originally, but the reissues are quite easy to find.
Of their compilations of unreleased material, The Latimer Sessions (a double CD release) is the better of the two. The Patron Saints definitely improved over the years - the quirky, underground vision is still there, but their ability to render ideas as a band is markedly improved. With well over two hours of material on offer, this is remarkably consistent throughout. Proto Bohob, however, is similar to their original Fohhoh Bohob and consequently has less to recommend it.
Eric Bergman also issued two solo albums that fall outside the scope of this book: Modern Phonography (Patron Saint PS-1) 1978, and Sending Out Signals (Patron Saint PS-2) 1982. Both albums have been compiled on CD with bonus material (Patron Saint PS CD-102/3) 1998. John Tuttle passed away in 1994
Tracks:
1. Flower
2. Nostalgia Trip
3. Reflections On A Warm Day
4. Do You Think About Me?
5. White Light
6. Relax
7. My Lonely Friend
8. Andrea
9. The Goodnight Song
10. Shine On Heart
11. Do It Together
12. Flower
13. Reflections On A Warm Day
14. White Light
15. Relax
16. Andrea
http://sharebee.com/bbd857ff
Posted by Psych-Spaniolos at 18:10

Well, this is as quirkey as it gets...just the way I love music of this time...thanks for sharing this gem.