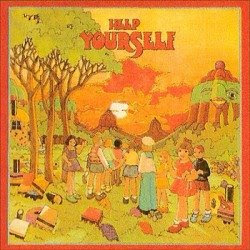 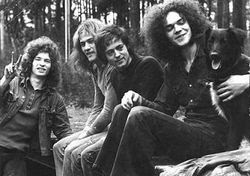 A progressive outfit, formed in 1969 and who also have one track, Street Songs, on the All Good Clean Fun compilation and two live tracks, Eddie Waring and Mona, on Christmas At The Patti.
Their first album is rather mainstream progressive rock meets pub rock, despite some excellent songs written by Malcolm Morley including the excellent Deborah. Most of the musicianship on the album is raw and derivative (with exception of Richard Treece's guitar) and consequently the punters weren't at all interested. After its release, Whaley departed for Ducks Deluxe and was replaced by Paul Burton.

Strange Affair exhibited a strong US West Coast influence with greater musical improvisation and some fine moments like American Woman. Beware Of The Shadow continued in much the same vein. Listen out for their magnum opus, Reaffirmation, on this one.
Ken Whaley rejoined the band in 1973, hence the title of their final album.
After their demise, Malcolm Morley had a spell with Man (and Ken Whaley later joined him there). The rest of the band joined Deke Leonard's Iceberg, and Treece was later in The Flying Aces.
(Vernon Joynson / Max Waller / Dennis A. Riley)
Tracks:
1.I Must See Jesus For Myself
2.To Katherine They Fell
3.Your Eyes Are Looking Down
4.Old Man
5.Look At The View
6.Paper Leaves
7.Running Down Deep
8.Deborah
9.Street Songs
http://sharebee.com/bebb537b
Posted by Psych-Spaniolos at 13:05

Bugger! I was just going to post those first 4 albums and...do you have the rest or can I post. If you have them planned it's fine with me. there was also Help Yourself 5 released not that long ago which as far as I can remember were reworked tracks from back in the day. Interesting to finally find out that it was not THAT Richard Treece!
Regards/