The Noblemen - Satisfied/She Thinks I Still Love Her (1965) 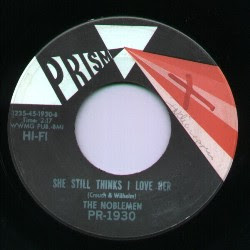 LARRY BURCH ld vcls, organ, gtr A B
JERRY COMPTON bs A B
CHUCK LARUE drms A B
RICK WILHELM gtr A
MICKEY SMITH gtr B

Formed in 1965 these Noblemen came from Indianapolis, Indiana. Rick Wilhelm and Brian Crouch co-wrote the 'A' side of their record, Satisfied. Larry Burch recalls: "I was the oldest (20) and Chuck the youngest (17), was still a senior in high school. The band was managed by Chucks' Dad Ramon and his brother Gene. We worked all over Indy and most of the state.... playing at a lot of small town armorys and teen dances, etc. We sold our 45 and 8"x 10" glossys for a buck each and developed a pretty good local following. One gig that stands out was playing for a Summer stock cast party of which Edie Adams was the main star. It was our only association with a major star at that time and I can remember we thought it was a pretty deal at the time. After about a year or so we cooled off somewhat and Rick left the group first and was replaced by Mickey Smith."
"After a few more weeks Mickey and I moved on to play in house bands in nightclubs playing in a group called Melting Pot. I left that group and went to the West Coast and the Melting Pot gravitated toward Florida. They did one album, Burn Fire, Cauldron Bubble (Capricorn Records ) before they disbanded. The drummer of that group (Jerry Thompson) went on to work some with Dickey Betts, but I don't know what they're doing now. After I discovered that The Noblemen were on a compilation record, I did locate Rick Wilhelm and he's still in the Indy area into real estate.
"As far as I know I'm the only one of the original group who has stayed in music all their life. I stayed in the San Francisco bay area for about five years working with a trio (The Company) and we worked from Portland, Ore. down past San Bernandino, Ca. and most points in between with a few trips to Reno and Tahoe. (Those gigs always payed well, and still do I guess) However this was the late sixties and in to the early seventies and I (plus the band and everyone else) were very much into "hippiedom" so a lot of the gigs remain kind of 'purple hazy' if you know what I mean. One thing that was constant until about 15 years ago was being on the road. I had met Woody Herman at a gig in Ohio and he was such a gentlemen and complimentary towards me that it gave me enough confidence to move to Nashville. It was there that I joined a R&B group called Pure Pleasure. We were managed by Ed Leffler from L.A. who was also at the time managing Sammy Hagar and a couple of lesser known groups. He went on to manage Van Halen until he passed away in '93 I believe. But he got us a deal with A&M Records and we did shows mostly around the South with acts like Cameo and The Commodores. etc."
"I've been in the Columbus area since '88 and have found it to be a good home base for gigs. One days drive in any direction has hundreds of places for musicians to work. I've had a band called Larry B and The Real Deal for the last ten years. We're fairly well known in the area and have done shows with the likes of Tower Of Power, Clarence "Gatemouth" Brown and most every one in between in that musical genre."
Compilation appearances have included: She Still Thinks I Love Her on Fuzz, Flaykes, And Shakes, Vol. 5 (LP & CD).
(George Gell/Max Waller w/thanks to Larry Burch)

Tracks:
1. Satisfied
2. She Thinks I Still Love Her
http://sharebee.com/b8aa4dc9
Posted by Psych-Spaniolos at 23:32