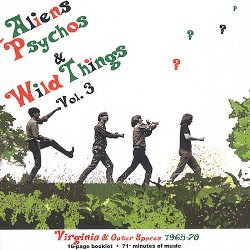 The third installment of Arcania International's exhaustive overview of Tidewater/Richmond Virginia garage and psych from the mid-'60s is chock-full of bands that -- well -- no one has ever heard of. Like the folks at specialty labels like Gear Fab and Norton, Arcania recognizes the appeal of unknown, unsigned bands from yesteryear. And though much of this material is extremely lo-fi (Velvet Haze's fuzz-drenched "Last Day on Earth") and amateurish (Banana's disastrous "I'm a Man"), there are several gems to be found. Some tunes, like Wilson Castle's "Party" and The Bosom Blues Band's "Hippie Queen" reveal legitimately sincere attempts at musical sophistication, posing the question; what could some of these bands have accomplished with a skilled producer and first-class recording gear?

The surprisingly good CSN&Y-soundalike psych-ballad, "Cherry Road," by a band called Plauge is just another fine example of this. What is, perhaps, most interesting about these bands, though, is to hear their imitation of the more popular sounds of the day. Shades of the Animals, Yardbirds, Jefferson Airplane, Iron Butterfly, and the Byrds are clearly evident. And while this collection proves that a fuzz box in the wrong hands -- or at the wrong feet -- can be a room-emptying disaster, there is no denying the exuberance, innocence, and bittersweet naivete of rock's under-the-radar bands of the 1960s. Compilations such as this, however, are perhaps most interesting to the un-initiated as -- at best -- social anthropology. This is not for the average vintage rock enthusiast, but dive right in if you are looking for something slightly strange but surely fun. ~ John Duffy, All Music Guide

This has got to be one of the hottest
Rochester Party Bands so far!

Can you make a Rapidshare link for Vol 2 & 3? The current link says I am forbidden to download from their server.

can you reupload this, i cant find this . i just listened the hippie queen on technicolor radio and i loved it, but i cant find the whole album. thankss.