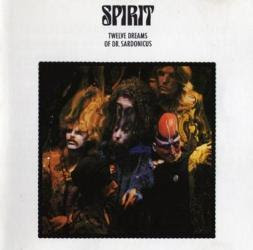 Twelve Dreams of Dr. Sardonicus was a largely successful, and decently grossing, album released by the psychedelic rock ensemble Spirit. Produced by David Briggs, who is best known for his work with Neil Young, its 1970 publication, undertaken by record label Epic, came shortly before the original group disbanded.
This loosely-based, sci-fi concept album is a diverse yet cohesive effort, and long considered by fans, critics and musicians alike to be one of the finest albums ever recorded The album's second song is the keynote track "Nature's Way", the most notable hit (along with "I've Got a Line on You") the band would ever produce. "Mr. Skin" also became a hit single in the U.S., three years after the album's release. The album also includes several other lesser-known tunes which are considered to have had an impact on the genre of experimental rock in the United States.
The album evidently had an influence on other groups -- the track "Morning Will Come" presaged the emerging glam rock trend and sounds strikingly similar to the music of Marc Bolan and T. Rex. The piano figure that opens the instrumental track "Space Child" so closely resembles the piano intro of the 1978 Steely Dan hit "FM" that it is almost certain that Steely Dan was making a musical reference to Spirit. A modern nod to Spirit was given by Sam Beam of lo-fi indie band Iron and Wine. The breakdown in "Wolves(Song of the Shepherd's Dog)" matches that in "Prelude-Nothing to Hide".
Just as in previous attempts, Spirit fused aspects of jazz and folk together with their traditional rock stylings, but unlike them, they introduced added elements of space rock, or popular music's science-fiction subset. This innovative LP is also notable as one of the first rock albums to use the newly-developed Moog synthesizer.
(Wikipedia)

Tracks:
"Prelude – Nothin' to Hide"
"Nature's Way"
"Animal Zoo"
"Love Has Found a Way"
"Why Can't I Be Free?"
"Mr. Skin"
"Space Child"
"When I Touch You"
"Street Worm"
"Life Has Just Begun"
"Morning Will Come"
"Soldier"
http://www.shareonall.com/Spirit_-_Twelve_Dreams_of_DR._Sardonicus_hntq_rar.htm
Posted by Psych-Spaniolos at 12:46

A classic from all time!