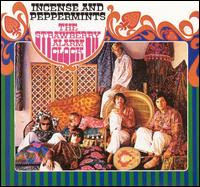 Αντιγράφω από το επίσημο site της μπάντας… The first LP released by the band and the only LP of their career to make an impact on the album charts, it reached #11 nationally. The LP contained the #1 national hit "Incense And Peppermints" which was written by members Mark Weitz and Ed King with lyrics by John Carter. The song was sung by a friend of the band, Greg Munford who was in Shapes Of Sound and later Crystal Circus. Also on the LP is Steve Bartek who co-wrote many of the songs with George Bunnell and plays flute on some tracks. An excellent LP with some great playing and heavenly harmonies

Side 1:
The World's On Fire
Birds In My Tree
Lose To Live
Strawberries Mean Love

Side 2:
Rainy Day Mushroom Pillow
Paxton's Back Street Carnival
Hummin' Happy
Pass Time With The SAC
Incense And Peppermints
Unwind With The Clock
http://rapidshare.com/files/91213311/Strawberry_Alarm_Clock_-_Incense_And_Peppermints.rar.html
Posted by Psych-Spaniolos at 17:45

Thanks. Great Album. I love this kind of music. Is from another world.
A world that was only in the late 60's and early 70's . *Sad . I wish I could be at that time. I was born in the wrong era. :/ . And also in the wrong country.

Now this one is what I've been looking for. Would be giving you credits on the way how you deliver this great insight. Such an interesting story. smoke spice